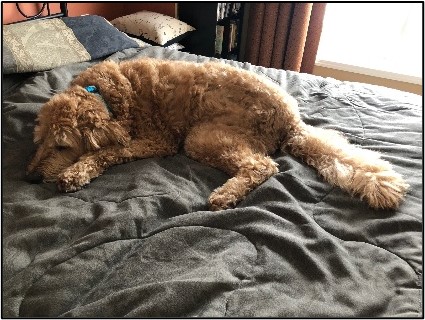 That’s a misleading heading because I actually think Finn has several, depending on the time of day. For example, as I write at 8 am he is snuggled cosily at the centre of my bed. He sleeps in a crate in my room every night and comes out at 7 when I let him outside to do his business, then eats his breakfast before returning to the recently vacated warm spot on the bed.
For much of the day he stays within a few feet of me but around 1pm he can be found at the front of the house enjoying the afternoon sun pouring in through the window. It’s also his lookout spot to keep an eye on the neighbourhood and let me know if anyone has the audacity to walk past!
Early evening, he will have the zoomies and crazy toy tossing and tug of war ensues, followed by him climbing up on to his favourite chair or the lap of anyone who happens to be sitting in it. Not the most comfortable of things as he is generally a long 85lb wriggling mass. Then on the dot of 9:15, he will stare me out until I realize he is done for the day and wants to go to bed. I open the bedroom door and he heads straight for his crate. It’s the same procedure every night and has been since he was a pup.
In subscribe to Whole Dog journal, www.whole-dog-journal.com,and read the following article about dog crates.
“A crate is not a place of punishment. Never force your dog or puppy into a crate in anger. Even if he has earned a time-out through inappropriate behavior, don’t yell at him, throw him in the crate, and slam the door. Instead, quietly remove the dog from the scene and invite him into his crate to give both of you an opportunity to calm down.
Nor is a crate appropriate for long-term confinement. While some puppies are able to make it through an eight-hour stretch in a crate at night, you should be sleeping nearby and available to take your pup out if he tells you he needs to go.
During the day, a puppy should not be asked to stay in a crate longer than two to four hours at a time; an adult dog no more than six to eight hours. Longer than that and you risk forcing Buddy to eliminate in his crate, which is a very bad thing, since it breaks down his instinctive inhibitions against soiling his den. Dogs who learn to soil their dens can be extremely difficult, sometimes nearly impossible, to house train – a common behavior problem for puppies from unclean puppy mills.”
Crate-training was never an issue for Finn, in fact he trained himself. The door to his crate was and still is always left open and he has a favourite toy and one of Dad’s sweaters in there with him. Definitely his happy place!