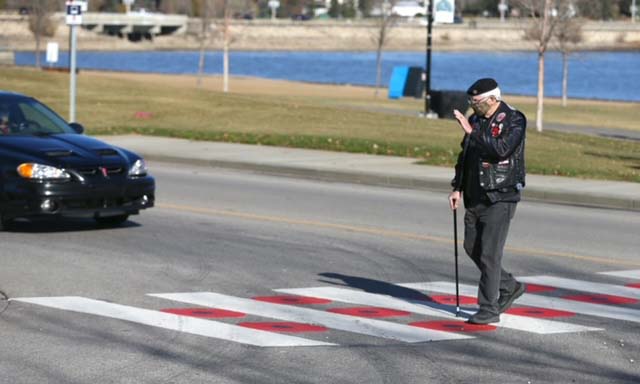 On October 25th a Red Ribbon Cutting ceremony was held at Anniversary Park to celebrate the Poppy Crosswalk that was created through the inspiration of a local teen, Keigan Davies. The event was organized by Christa Hiebert and Tricia and was very well attended with moving speeches given by Christa Hiebert, Chestermere Mayor Colvin, MLA Aheer, Chestermere Councillor Sandy Johal-Watt, Sergeant Maxine McKellar (Ret’d.), Marie Blackburn of the Veteran’s Food Bank Association and Tricia Davies.

The Poppy Crosswalk was a project a year in the making after 14-year-old Keigan Davies asked why we remember our veterans on just one day of the year?

A very good question from Kiegan and one that led him and his mother Tricia, to work with Chestermere City officials to create the Poppy Crosswalk, in the hopes that everyone who crosses the walkway will see the poppies and remember that we enjoy our freedom because of the service and sacrifices of our veterans.

A few days prior to the Red Ribbon event, poppies were painted between the white lines on the crosswalk from the Chestermere Regional Recreation Centre to Anniversary Park. This is a very appropriate location, as it leads one to the Cenotaph, a beautiful commemorative wall that was spearheaded by Veteran Ray Hessler and designed by his son Veteran Richard Hessler, to honour the many veterans around the world.  If you have never been to visit this site, I hope you will feel inspired to do so in this next week. The City of Chestermere will be holding a live and live-streamed Remembrance Day Ceremony at Anniversary Park by the Cenotaph on Thursday November 11th, starting at 10:45 am. For more information about this event please go to: https://www.chestermere.ca/609/Remembrance-Day

The Poppy Crosswalk became a hot issue here in Chestermere when the Royal Canadian Legion commented on Global News on October 23rd that while they understood the good intentions of this project, ultimately they felt that people walking on the poppy was disrespectful to veterans. Their stand might have more merit if it was upheld everywhere in Canada, but has now become a bit of a cloudy issue when you consider that both Vernon B.C. and Swift Current Saskatchewan have poppy crosswalks that did not receive the same objections from the Legion.

It leads one to ask the question: “Is the Royal Canadian Legion objecting to the Chestermere Poppy Crosswalk itself, or are they objecting to it because their approval was not sought prior to the project being completed”?  The Royal Canadian Legion holds the rights to use of the poppy emblem and according to their regulations their permission or approval must be obtained prior to use of the emblem. Unfortunately, this was not known by the organizers for this project. Clearly there was no outright disrespect for the Legion’s regulations, it was merely a matter of not being aware of the trademark rules. An innocent error that has since been addressed by the City of Chestermere making the effort to seek approval after the fact. The outcome of this effort is not known at this time.

When I first heard of the reason why the Royal Canadian Legion objected to the Poppy Crosswalk, I felt compelled to search my own personal feelings regarding the sentiments that walking on the poppy while crossing the road is disrespectful to veterans.  My father served in WWII and remained in the Canadian Army Reserves for the rest of his life. He passed away 28 years ago so I can’t give his response to this, but as his daughter I feel the poppy crosswalk is very honouring and in no way disrespectful!  As I listened to the many speakers at the Red Ribbon event on October 25th, I became very emotional thinking of my father and all the other veterans who served our country in the name of freedom for all; knowing that they will be remembered every time people use the Poppy Crosswalk.

This was the intention of young Kiegan, who was inspired by his grandfather who is a veteran. Kiegan wanted to find a way to remember & honour all our veterans every day, not just on November 11th.  I feel that young people like Kiegan should be celebrated for their care, compassion and initiative! Many others feel the same, including US Army Veteran Roger P. who approached Kiegan at the Red Ribbon Cutting event with a very proud handshake and presented him with his challenge coin.

This is my opinion – what’s yours?

Are you in support of the Poppy Crosswalk in Chestermere?

Comment below to join the Hot Talk in the City the online conversation!

Are you in support of the Poppy Crosswalk in Chestermere?
Total Votes: 129
Voting is closed

Karen McKee moved to Chestermere from Thunder Bay, Ontario in 2012. She and her husband of 42 years live a very active life with a family of 4 children and 1 grandson. Her earlier work career was in sales & marketing. In 2014 she became a Certified Coach Practitioner and in 2015 she formed her company PathwaysCoaching.
Karen volunteers in our community for multiple activities and events.
She is passionate about excellence in leadership and good governance and hopes to share that passion with others through her writing.