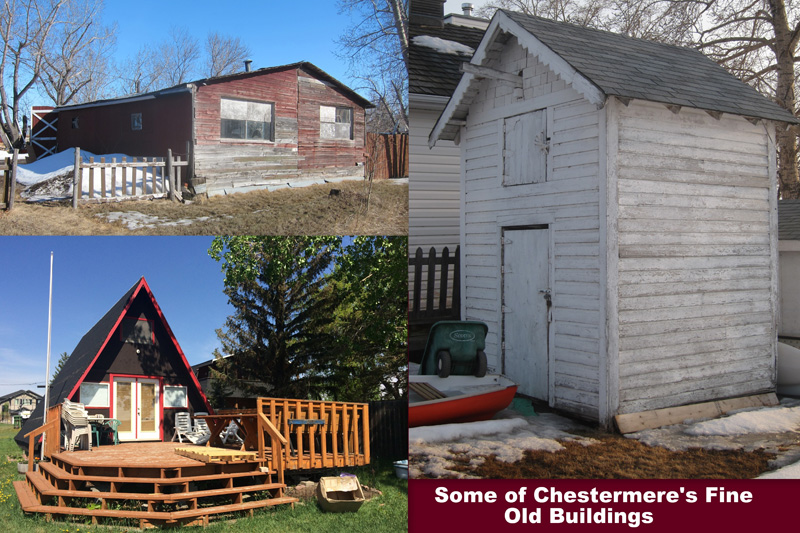 No historic main street, no historic train station, no historic downtown…but Chestermere still has a few old buildings that harken back to the early days of farming, and using the lake as recreation and sport  in the early days.  Farming – there are two lovely well preserved small barns, one of which is on the Clarke farm in SE Chestermere and the other belonging to the Lorraine and Dave Webster which can be seen, very appropriately, from Founders Park.  The ice house found at Camp Chestermere is a remnant of very early days there when the Cadet Camp existed there, you can see the upper door and hook for a block and tackle to lift ice up and in when the rest of the little shed was full.  Ice would have been cut from the lake, and stored in this house for summer use, insulated probably with straw.  And Camp Chestermere has preserved one of the original cabins used by that Cadet Camp. It was built and used by cadets early as the 30s.  As you drive along East Chestermere Drive, at the corner of East Merganser Drive, looking east you will see the old red horse barn from Rockland School.  Rockland School was just north of the #1A ( Chestermere Blvd, 17 Ave SE) on 68 Street.  At the time of Rockland School closing in 1956, the local bus driver Len Baldwin Sr. hauled it from the school to 538 East Chestermere Drive. Len built on to the lean-to to make a full garage.  Len was a driver in Chestermere area from 1943 to 1975.   As for the old cabins, what is more iconic than the A frame on West Chestermere Drive?  In early ‘cabin’ days, it was the only thing that stood above the horizon on the west side of the lake when you looked from the east side. Built in the early 60s by Mr. de Ritter, and bought in 1968 by Peter and Verni Gretener, it still stands and was the photo used in a Feb 7 1976 Calgary Herald article about the ownership changes that  lakeside cabin owners faced that year. (you can see that photo on page 184 of Chestermere a Home for All Seasons).

The Chestermere Historical Foundation (CHF) is working to document as much as possible the early life here in Chestermere.  Photos of old cabins will be added soon to the gallery in the Chestermere Library.  Do you have any old Chestermere photos?  Or, If you are interested in local history, on Tuesday June 19th at 7:30pm come out to Camp Chestermere 1041 East Chestermere Drive to hear about the 80 year history of camps at this site, starting with the Cadet Camp in 1937.  Come earlier at 6:30pm to hear about other projects and programs upcoming at the regular meeting of CHF.  Become a member!  For information go to www.chestermerehistoricalfoundation.org or call 403 200 8046.