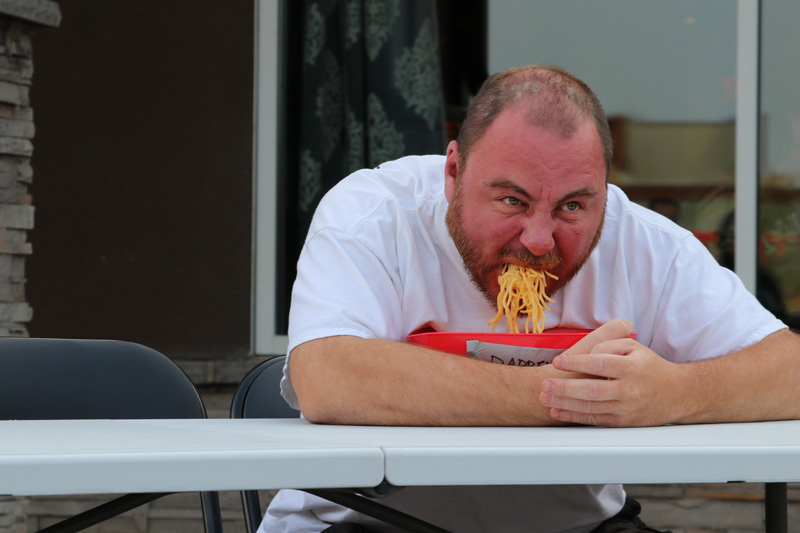 Crazy Pasta hosted the first annual Pasta Eating Challenge on July 27 to show locals that if they want a good pasta they can skip the drive into Calgary.

The Pasta Eating Challenge was a hit among pasta lovers in Chestermere, with around 30 residents filling the parking lot to enjoy watching friends and family consume one kilogram of pasta in 60 seconds during three rounds.

“The goal was I wanted to bring more activities to Crazy Pasta, and let people know the businesses, because I’m new and I’m in a different area of town,” said the owner of Crazy Pasta Carl Bupre.

“When people think of Chestermere, they think The Station,” Bupre said.

“The challenge is something new, I’ve never seen a food competition in Chestermere before,” Bupre added, hosting the challenge wasn’t for him, it was for his customers.

There to entertain the pasta lovers was the Manager of Economic Development of Chestermere Catherine Proulx who went on to win the Pasta Eating Challenge in the women’s category.

In the men’s category, the Vice-President of the Chestermere Chamber of Commerce, Zane Southgate and Chestermere resident Nathan Sapieha went up against each other for who could devour the most pasta. Sapieha came out on top.

Sapieha said the experience was enjoyable, and he would do it again if given the opportunity. He added, his technique of swallowing the pasta frequently worked in his favour.

The Pasta Eating Challenge was a team effort, however, with Bupre and businesses owner of Choice Voice Graydon Pease.

“I thought the turnout was great, a few guys didn’t show up, but the first year is always tough, as it grows I think it will be fun,” Pease said.

“I was happy with this crowd, the fact that we had people here with homemade signs, it’s all good community stuff,” Pease added, “It’s a lot of fun to watch, people come together, it’s not a huge-huge thing but it’s the beginning to other things we can grow with.”

Pease added, “Events like this pull the community together, and gets everybody on the same page in terms of being able to get their hearts around something.”

Since Bupre has opened his Italian eatery in January he has required assistance in gaining the communities attention to his business.

Pease took it upon himself to help local businesses promote and get the word out to the community about what the businesses offer.

“We have some wonderful stuff in Chestermere, and we just need to support these local guys,” Pease said.

“I know Carl works about 85 hours a week, this is just really wonderful to see him shine in events like this,” Pease added.

“From my stand point, I’m a real big community guy, and the struggle that Chestermere has is that we’re so close to Calgary so for the local businesses its harder here than it is for somewhere like Strathmore which is another 25 mins down the road.

“It’s more difficult to get people to believe that what we have here is just as good or better than what they’re going to get in Calgary and save the drive,” Pease said.

“The better our businesses do, the better our city does, and that’s the key for me. We have to support these people, and get behind them, because we have amazing stuff in Chestermere, we really do,” Pease said.