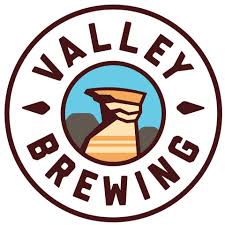 I had out-of-town guests last week, so made the rounds of the usual tourist destinations.  One of our stops was the Royal Tyrell Museum in Drumheller, so I naturally made some time for a visit to Valley Brewing, Drumheller’s only craft brewery and taproom.

I had thought the day trip to Drumheller would be a quick one, but one of my visitors was a geologist, and insisted on a last-minute hike through the hoodoos, regaling us with tales of how hoodoos formed in many parts of the world about 75 million years ago, and hoodoos in the Canadian Badlands around Drumheller are unique the world over, thanks to the sandstone composition of the area.  See them while you can, as the hoodoos erode a few millimetres every year, so they may disappear entirely over the next few millenia.

The hoodoo hike built up a powerful thirst, so I guided the group into Valley Brewing, who opened their doors last summer, and they have been on my to-do list ever since.  Nestled in a cozy building right downtown, the patio was looking lonely and forlorn that cold February afternoon, but served as a reminder for me to return in the summertime for a patio pint in the badlands, with hoodoos and dinosaur fossils all about.

Valley Brewing is the brainchild of two local entrepreneurs, who quickly recruited local legend Nick Patterson, formerly the Brewmaster at Strathmore’s Origin Malting & Brewing, so many Chestermere residents are already familiar with his work.

There were over a dozen beers on tap during my visit, a mix of a core set of flagship beers and an assortment of one-off seasonals and experimental brews.  I was heartbroken to have missed the last key of Coconut Dark Ale, but hope springs eternal that it will return later that year.

Wheat beers with fruit additions are common in Alberta, with Aprikat from Edmonton’s Alley Kat Brewing and WRaspberry Ale from Calgary’s Wild Brewing being two popular examples.  Valley Brewing brings a new contender into this category with their Discovery Wheat Beer, with generous additions of fresh raspberries during the brewing process for a tart and crisp finish to help you cool down on those hot summer days in the badlands.

The Capstone Pilsner is the gateway beer that brings the macrobrew drinkers into the taproom, a light and refreshing lawnmower beer they kept running out of during the summer months due to high demand.

For those raised on a steady diet of Coors Lite, the Full Steam Copper Lager is the next step towards craft beer appreciation, a copper-hued easy drinker with hints of roasted caramel malts providing the deeper colour.  The beer snobs of the world tend to eschew lagers in favour of the more flavourful ales, but the Valley Brewing Copper Lager seems to be on a mission to change the hearts and minds of the beer snobs of Alberta.

For IPA fans, the Namesake IPA is made in the hazy and citrus-forward style of IPA that is becoming more popular, with less emphasis on the bittering hops, letting the aromatic hops bring out tropical notes of pineapple and mango, and only a minor filtration process to leave a hazy mélange of yeast and barley proteins in the brew for a more complex flavour profile.

The Coal Rush Porter was perfect for a cold February afternoon, made with dark roasted Alberta barley, and steeped with coffee beans and Madagascar vanilla bean for a blast of malty goodness balanced with chocolate and coffee notes.

My out-of-town guests preferred the Prairie Icon Farmhouse Ale, made in the Saison style made famous by Belgian farmers in centuries past.  The yeast-forward finish brings nodes of cloves and lemongrass, with a spicy peppercorn finish.  Much to my delight, the Saison style has been rapidly growing in North America, with our Alberta craft brewers taking full advantage of the wide expressions of the style to showcase their creativity.

Make a day trip to Drumheller to sample the wares straight from the brass teats in the taproom, or look for Valley Brewing in cans at your friendly neighbourhood bottle shop.