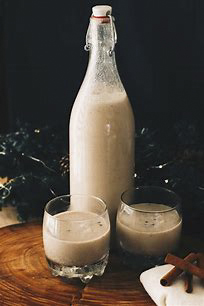 Eggnog is a festive drink that reappears every December, a thick and overly sweet concoction that is enjoyed by all ages, although the grown-ups in the audience may add a shot of rum to help endure the endless caterwauling of Christmas carolers.

The easiest method of obtaining eggnog is to buy it in the dairy section of your local supermarket, and either consume it as-is from the carton, or cut it half-and-half with milk to reduce the sweetness. For the purists with plenty of time on their hands, there is also the old-fashioned way to prepare eggnog from scratch.

Start by simmering two cups milk and one cup heavy cream in a saucepan on low heat. In a separate bowl, whisk together 6 egg yolks with half a cup of sugar, then slowly drizzle in the contents of the saucepan, whisking the entire time to prevent clumping. Once you have slowly added the simmering milk to the bowl and whisked until all lumps are gone, slowly transfer back to the saucepan, stirring constantly to prevent curdling. Thicken the mixture by continuing to whisk the saucepan over low heat, and add a teaspoon of vanilla extract and a few pinches of nutmeg and cinnamon.

Once the mixture starts to thicken up, remove from heat and chill in the refrigerator for a few hours, but finish the whole thing the same night because the raw eggs will go bad by the next day.

Due to a combination of laziness and fear of salmonella from raw eggs, I stick with the supermarket eggnog, but tweak with my own boozy additions. The most common spirit to liven up an eggnog is a shot of dark spiced rum, or for the tropically minded, a shot of coconut rum.

For those who find eggnog too sweet or too viscous, another trick is to add 1 part eggnog to 3 parts Bailey’s Irish Cream, optionally thinned out with a bit of milk, then served in a tumbler over plenty of ice. Garnish with a candy cane for that festive holiday cheer!

Always eager to expand my tippling horizons, I have become quite partial to Coquito, also known as Puerto Rican eggnog, which is a rum-based cream liquor flavoured with coconut, sort of like a tropical spin on a Bailey’s Irish Cream. Coquito is available at well-stocked booze merchants this time of year, but is also easy to make at home by mixing 4 ounces of rum, a dash of vanilla, one can of coconut milk, and one can of sweetened condensed milk in the blender, then simmering at low heat to thicken up. As an added bonus, no raw eggs means your homemade Coquito will last longer, with purists letting the blended mixture sit in a sealed bottle in the refrigerator for up to two weeks for maximum flavour, then served chilled in shot glasses as after dinner treat.

I have never been patient enough to let my Coquito mellow for weeks at a time, but I can confirm that with a dash of vanilla and a bit of cinnamon, it tastes delicious after just a few hours in the refrigerator, and injects a little splash of tropical joy into the icy month of December in Alberta.

The true origins of the Coquito are lost in the boozy mists of time, it is suspected to have come to the Caribbean with the Spanish conquistadors, a blend of European tradition with rum from the new world, and has spread from Puerto Rico to the neighbouring countries with slight regional variations, but still very recognizable as a coconut cream liquor. Look for it at your friendly neighbourhood bottle shop, or blend up a concoction at home to chase the winter blues away!