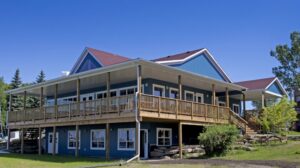 The Calgary Yacht Club currently has over 110 members who are likely going to enjoy the new facility.

CHESTERMERE– The Calgary Yacht Club is finally ready to set sail with its new building after over a decade of planning and construction.
One of the area’s oldest establishments, the club literally pre-dates Chestermere’s classification as a town and even as a village. And despite being renovated a number of times over its 78-year occupancy, club manager Fie Hulsker said it was time for a change.
The living room and kitchen had been cobbled on the old building, and the additions left double walls and mismatched wiring everywhere. Many may also recall frying away on the exposed lakefront deck and then shivering in the non-insulated building come October.
However, not everyone was onboard, she said. Hulsker credits commodore Stephen Reichenfeld with keeping everyone from jumping ship.
“It was just a hodgepodge, so it had really come to the end of its life,” she said. “But, getting the membership ready for that is a big step.”
Lindsey Bladon, the club’s head sailing instructor, said there are lots of fond memories of the old club, but she added it’s moving in an awesome direction.
“The community is getting bigger and our programs are getting bigger, so we need to grow with the community,” Bladon said. “Not just for ourselves, everything around here is growing so fast.”
Hulsker said it hasn’t exactly been smooth sailing since renovations began back in October 2010. Being a non-profit she said the group had to stick closely to the $500,000 budget they saved up because it’s so difficult getting additional financing.
The club got several member contributions — including landscaping, heating and cooling, and general labour help, which helped keep costs down. The originally members’ opening was originally planned for mid-July, but it had to be pushed back to accommodate trades.
“Once we got our occupancy, it felt like everybody exhaled,” Hulsker said. “It was a really great feeling.”
The new building only increases the facility’s size by 1,000-square-feet to a total 2,500-square-feet. However, its open design makes it feel significantly larger.
Members also decided to add a basement to house workout equipment. Adding a basement raised building’s overall height, so it’s now possible to get a mountain view from the new deck as well.
Renovations likely finished at a good time as the club appears to have a very busy August.
A member’s grand opening is now planned for Aug. 20 and a big public launch party is set for the September long weekend. The club also started its pub night last week, which is expected to run Fridays from 5 to 9 p.m. Everyone is invited to attend
The Alberta Provincial Sailing Championships are also going to be held at the club starting on Sept. 3. Bladon said it’s always been an active club and she’s hoping to see more people getting involved.
“We want Chestermere to know we’re here and open,” Bladon said. “We have summer programs, camps, racing and social programs.
“We have the entrance to a life-long sport in a water-based community. It’s a perfect fit.”
Visit cyc.ab.ca for more information.