The General Store supports children in need at Christmas 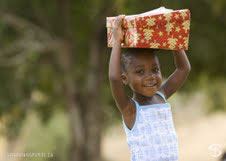 It won’t be long before there is snow on the ground again which means it is time to start thinking about Christmas.

For Julie Rintoul, owner of The General Store in Chestermere this also means it is time to think about what we can do to help children all over the world.

For the past six years, The General Store has been participating in Operation Christmas Child by providing the residents of Chestermere the opportunity to fill shoe boxes with school supplies, toys, hygiene items, candy and a personal note to then be shipped around the world to children in need.

Operation Christmas Child is one of the several programs run by Samaritans Purse – a non-denominational evangelical Christian organization that has been providing spiritual and physical aid to hurting people around the world since 1970.

The local business not only acts as a collection site for the filled shoe boxes, they are also happy to offer a 10% discount toward items purchased for this program.

Rintoul herself has been participating in the program since she was in elementary school and feels it is important to continue because it is a simple way of giving directly to a child in need.

“This program creates an instant smile when they (children) receive it” says Rintoul of the unique opportunity for people of all ages to be involved in a simple, hands on project that focuses on the true meaning of Christmas by sending good to a developing countries rather than the usual monetary donation. “This just seems a little bit more real to me.”

Through The General Stores efforts, Chestermere residents have contributed approximately 700 shoe boxes filled with various items in six years. Over 100 million shoeboxes have been distributed worldwide since the beginning of the program.

The General Store will be offering the 10% discount as well as accept the boxes up until November.15th. They will then deliver them to Samaritan’s Purse in time for the National Collection Week which runs from November 18-24, 2013. Boxes are also available at The General Store for those who do not have a suitable one.

If you or your family would like to participate in Operation Christmas Child, visit The General Store which is located in the Chestermere Station shopping complex near the Safeway.

View all photos for this story