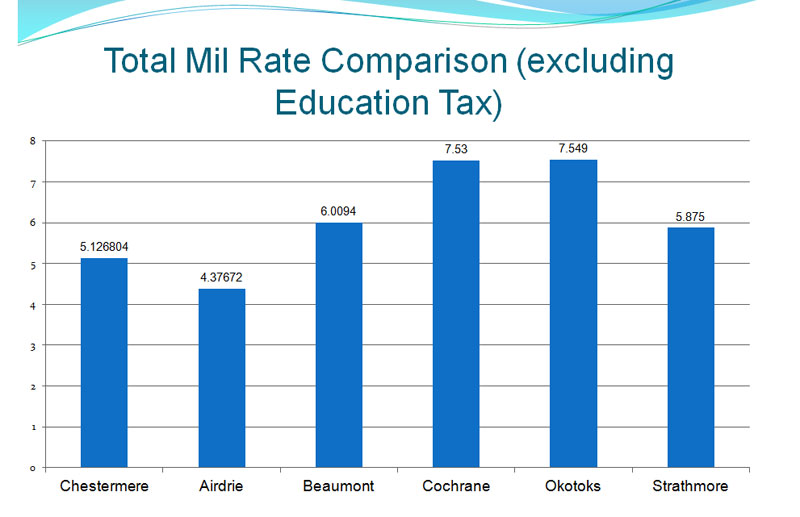 At the December 2 meeting of Council, the 2014 preliminary budget was approved causing an increase of 4.95% in 2014. This increase means that the average taxpayer (with a home assessed at $500,000) will pay approximately $10.43 more in municipal taxes each month.

There are many highlights and items addressed by the 2014 Budget including the creation of a new intersection at Chestermere Boulevard & Marina Road; studies to determine the feasibility and sustainability of building a new major multiplex recreation facility; new Emergency Services personnel as well as the completion of the new RCMP building; continued life-cycle support for maintaining the CRCA Recreation Centre; annual contributions for the replacement of infrastructure and the start of a long term pathways connection project.

Mayor Matthews says that Council carefully considered all requests and balanced the needs of Chestermere residents to continue to receive high quality services with strong fiscal management. “The Town continues to face financial pressures and increased demands for services and infrastructure. While commercial and light industrial sectors continue to grow and remain a priority for Council, residential taxes are the primary revenue source for the Town.”

According to Smart Towns; an independent firm that does dash boarding for municipalities, in 2012, Chestermere had the 6th lowest residential tax rate of 40 similar sized municipalities.

When asked about the tax increase the Mayor replied, “Chestermere has been a growing community for over a decade and its residents are requiring more services and amenities as we get larger, the new RCMP building is a good example and so are the recreational offerings.” She explains that Council wants to provide good fiscal governance and continues to strive to keep taxes low while keeping our future fiscally sound, “To do that we don’t carry large debt and our taxes are still in the lowest 25th percentile of the Province.”
Matthews adds that the Town is putting away reasonable savings for the future for when they need to replace assets to avoid a huge increase. For example, the infrastructure fund was created to begin to replenish reserves that it has slowly been using over the years so that they don’t have to put in a huge tax increase in the future when our roads and buildings start to fail. “We are still providing quality service with one of the lowest staff per capita ratios in Alberta. In short, we are making the most out of every penny and still providing what residents tell us are important services and amenities to make this a great place to live,” states Matthews.

The budget also contains an increase for Council salary but Matthews says it is reflective of the recommendations of an independent resident panel (works out to .2% of the budget) that compared similar sized municipalities.
Long-time Councillor and Deputy Mayor, Heather Davies adds “Directors did a super job presenting a financial plan for the town to continue to run efficiently and effectively.”

Mayor Matthews encourages anyone with questions about the 2014 preliminary budget to contact a member of Council. Contact information for each Councillor is available at www.chestermere.ca/council. Additionally, If you have any questions about the budget process, contact the Corporate Services Department at (403) 207-7050 or email town@chestermere.ca.
The final budget will be approved in March or April 2014.