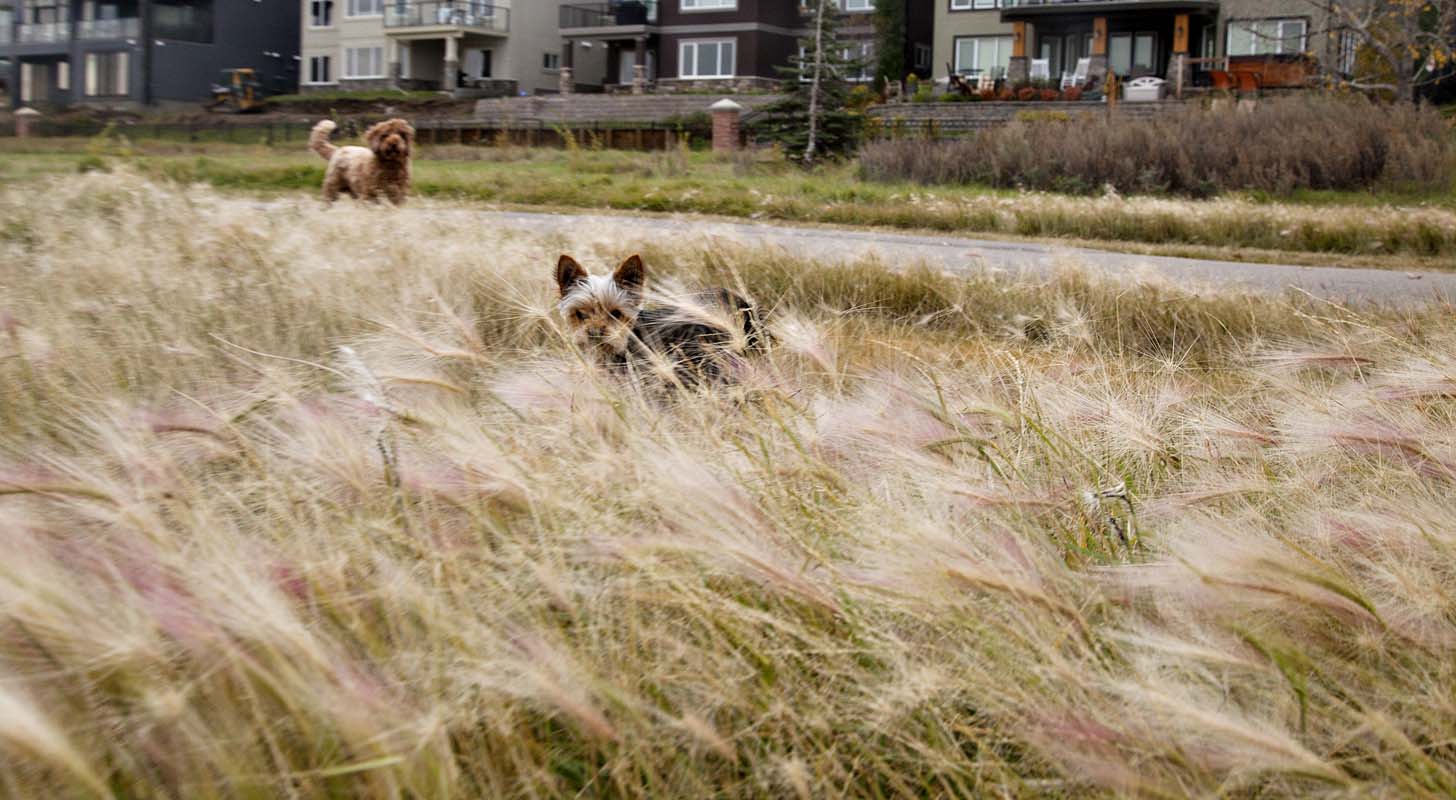 Chestermere dog owners are being reminded to keep their pets away from foxtail weeds when walking their dogs.
Local resident Kathy Clark was shocked by how many of the weeds are growing in the off leash park north of City Hall.
“I’ve never seen so many foxtails in my entire life,” said Clark of a recent walk in the park.
After her walk, it took Clark 2 hours to clean her dog. She estimates that she removed between five and six dozen foxtails from her dog.
She has had to talk a previous dog into the vet for surgery to remove foxtails.
Clark contacted the city with concerns about the foxtails and would like to see them removed or have warning signs put up.
City of Chestermere Recreation Coordinator Katelyn Richards said the city is aware of the weeds and cautions residents to avoid them with their dogs.
“They’re a common meadow grass, they’re known as a weed by Alberta standards,” said Richards, “but they’re not a noxious weed so we’re not required to get rid of them in our parks.”
Foxtails, a common weed found on the prairies, have clusters of seeds giving the plant the appearance of a fox’s tail.
These weeds are invasive and very difficult to control. Due to the dog parks proximity to the lake, the city isn’t allowed to use pesticides for weed control.
The off leash park is maintained as a naturalized area.
“So of course there are going to be some weeds in that area,” said Richards.
She said that dog owners have expressed to the city that they like the natural look of the park.
Richards said that people looking for more information on city parks, including the dog park can go online to www.chestermere.ca.
The foxtail seeds, which are meant to burrow into the ground, have sharp points and barbs that can work their way into a dog’s tissues like a sliver.
This can cause severe discomfort and infections for the dog. If the seeds aren’t removed they can migrate under the tissue through the body.
The seeds are most dangerous when they have dried out in the fall but pose a hazard all through the summer and autumn.
It’s a common problem that the vets at Chestermere Veterinary Clinic deal with.
“We can get anywhere from…two to six dogs in a month with known foxtails,” said Dr. Gabriela Rotaru.
She said the most frequent problem they see are the seeds getting caught in the dog’s throat.
“We see them lodged at the base of the throat,” she said, “In the tonsil area.”
“They have hacking and coughing and gagging and [it’s] very uncomfortable,” said Rotaru.
Prevention is the best line of defense.
“I would prevent them from eating the dried grass and the foxtails,” she said.
Rotaru said that it is important to check the paws and legs of dogs after a walk, especially if they ran through foxtails.
“Check their paws, check their legs,” she said, “brush them when you get home.”
Doing this can help prevent a lot of vet visits said Rotaru.
Foxtails can enter a dogs body through the feet, mouth, nose, eyes and ears.
Signs that could indicate that a dog is being affected by a foxtail include;
• Licking or chewing at their feet or skin.
• Redness or a discharge from their feet or skin.
• A slow or non-healing wound.
• Persistent gagging, retching coughing or swallowing.
• Sneezing, pawing at or bleeding from the nose.
• Redness, mucous discharge or swelling of the eye.
• Shaking, tilting head or pawing at ears.
If a dog is exhibiting these symptoms Rotaru said it is best to bring the dog in for a check-up right away.
“It’s much easier to act then…because once they migrate it’s so much harder to get them out,” she said.