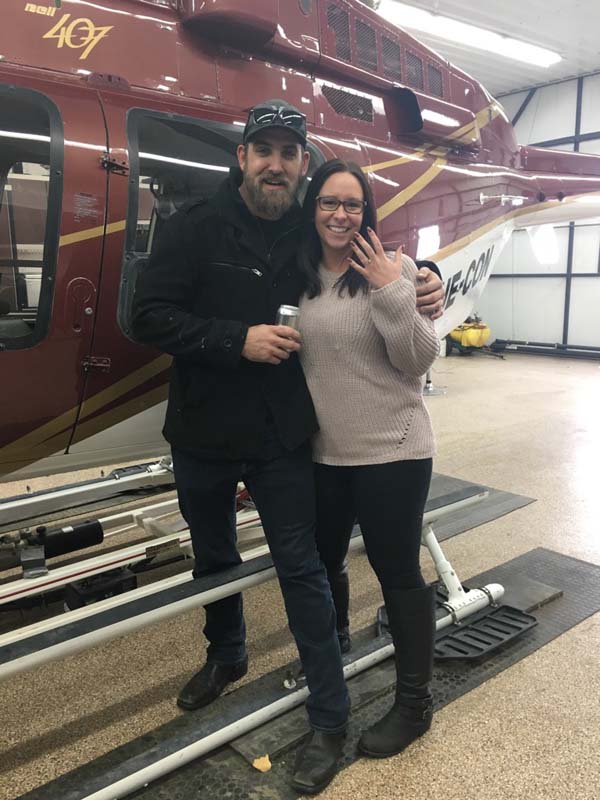 Submitted Story
When Kale Needham decided to take his relationship to the next level, he really got elevated.
On Nov. 4, Needham had his friend Matt Haasen take him and his girlfriend of six and a half years on a helicopter ride. It was Ashley Leptich’s first time in a chopper, and it was certainly one she won’t ever forget.
While the couple was taking a ride, their friends and parents were planting a sign on the roof of their house that said, ‘Ashley, will you marry me?’
Of course the answer was yes, when she eventually saw the sign after a third pass over the house.
“I couldn’t even find it,” Leptich said. “I had never been in a helicopter before, so I thought it was super cool and I was looking all over the place. He pointed out the house but I was just looking around. I saw him pull the ring out before I actually saw the sign.
“It was a pretty big shock. I didn’t imagine it would happen like that. We booked a Mexico trip (for January) so I was assuming he was going to do it in Mexico. He made a much better plan.
“He knocked it out of the park that’s for sure.”
For Needham to pull off the surprise, he needed an elaborate plan. He didn’t want to just invite themselves up in Haasen’s helicopter, so he worked with his good friend to concoct an innocent reason why they would be going up in the air. They needed some great acting to pull it off.
“That’s where it got tricky,” Needham said. “If I told her we were going for a helicopter ride, she would know something was up.
“I planned a fake meeting with Matt. He bought a ticket off me and I had to meet up with him to give it to him, so Ashley and I went for coffee with Matt. He’s the one who brought it up. He mentioned, ‘At our friend’s wedding I offered you guys a ride and never got around to doing it. Do you guys want to go for a helicopter ride this weekend?’
“Ashley had no idea because it came from him. He played it very well.”
The entire ride is caught on video by a friend of Leptich’s, which of course didn’t seem weird to the newly engaged woman because it was her first ride and who wouldn’t want that on tape?
The plan went off without a hitch, even though it was third time the charm for Needham on getting the love of his life to see the sign.
“In the video, you can see me get out of my chair and point out the window and say, ‘Do you see what is written on our roof right there?’ That’s when her face turned and she lit up,” Needham said with a laugh.
The couple is wasting no time making plans for the wedding. They are hoping to have the big night next fall in Indus, and Needham says his bride to be has had this mapped out in her head for years.
The proposal wasn’t unexpected but it was such a shock to Leptich because Needham isn’t usually the romantic type.
“Not even a little,” Leptich said. “I couldn’t believe it. We are pretty much the first out of all of our friends (to get engaged) so he set the standard high. I’m sure all the guy friends are saying, ‘C’mon man.’ ”
TagsLangdon top