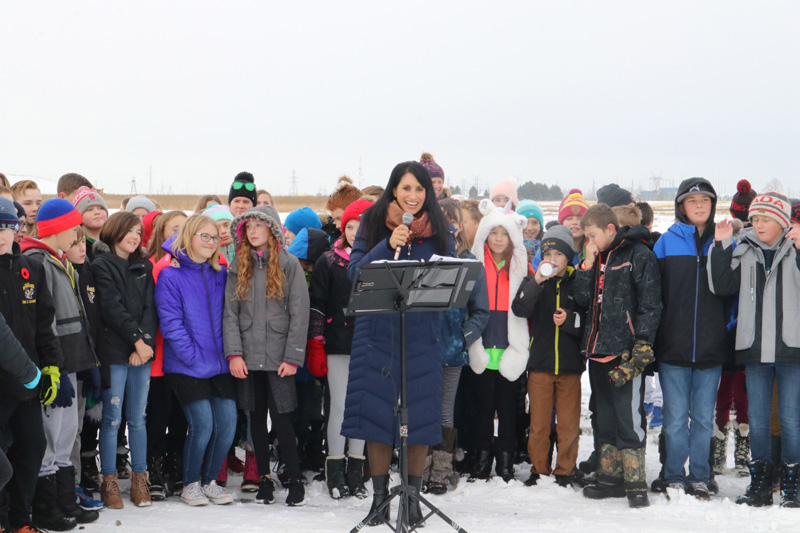 The province allocated design funding for the Langdon School Project

Recently Langdon was announced as one of the 25 Alberta communities, which was given either school design funding or school build funding.

“I just want to say thank you to all of the teachers, principals, vice-principals, trustees, all of the volunteers and moms and dads who have worked so hard to have a new school come to be. You guys have earned it,” Aheer said.

“We are so proud. They did so much work to get this school here. The truth is that communities are what come together to build things, and this is built by this community,” she added.

The Rocky View School (RVS) Board of Trustees are planning for a grade seven to 12 school to be built in Langdon.

“If it’s built in the next two years, we wouldn’t have enough grade 10 to grade 12 students to fill a whole new school, but we would definitely have enough grades seven to 12,” said RVS Ward Two Trustee Patty Sproule.

“Long before a school is built in Langdon, we will be well-well overcapacity at that high school,” Sproule said.

Currently, the Langdon School Project is in the design phase. The next step is for the RVS Board to put out a request for proposal to an architectural company to design the building.

The architectural companies will then work with RVS, and the community to design a school that fits best with the community.

The design process can take anywhere from one year to 18 months to complete.

“It’s quite involved, and no two schools are alike,” Sproule said.

“There will be consultation with the community and opportunities for them to be involved in talking about what they want to see in that school,” she added.

“Once that’s done, and hopefully sooner rather than later, we’ll move on to actually building the school,” Aheer said.

Adding, “Soon, we’re going to see shovels in the ground here, and a high school come up sooner than we expect.”

The Langdon School site is a joint-use site, which will also accommodate a recreation centre.

“The school and a recreation site are being planned for the very same site, we want to find as many efficiencies as we can in working with Rocky View County (RVC), and the recreation board in Langdon to see if we might be able to share space to have the best use of space,” Sproule said.

“We’re going to keep looking for every opportunity we can to not duplicate what we’re doing with the space,” she said.

The Langdon School project will benefit students in Langdon, Indus, and the surrounding rural areas.

By building a grade seven to 12 school, the overpopulation pressure will be taken off of the Langdon School and the Indus School in the older grades.

“For the most part it will be a shorter bus route, they will have an actual high school right in their community, where you can make a community hub,” Sproule said.

“Especially since this is going to be a joint-use site with a recreation centre on it, it will become very much a community hub,” she said.