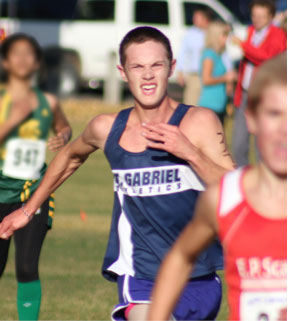 Maisonneuve pushes for the finish line

The High School Cross Country team completed their second meet of the season last week at Stanley Park. The team was left short due to injury and scheduling conflicts, but put in a great showing. Jordan Maisonneuve (pictured below) recorded his second top 10 finish of the season, while Glen McIsaac, Connor Seabrook, Devin Wilkins, Aidan Jamieson and David Nguyen also ran and accorded themselves very well on a tough course. The third meet of the season is at Canadian Olympic Park this Wednesday at 4:45 pm. The City Championships will be held next week.
SGA’s newest powerhouse!
The Junior Varsity Volleyball team is very quickly making a name for itself and putting the rest of the city on notice: there may be a new contender in town. Coached by Darrel van Paridon, the boys have started the season very impressively winning their first three matches and taking nine out of eleven sets in the process. The team is a perfect blend of youth and experience. Nick Zeiler, Kyle
Hoeschen, Josh Martin, Aiden Jamieson and Jordan Maisonneuve make up the grade 11 contingent on the team, while grade 10 students Jayden Richter, Raeden Mendoza, Ali Fedda, Miguel Avinante, and David Nguyen round out the squad.
There was optimism surrounding the team coming into the season, but putting out a strong team is never a guarantee of success in sport. It would seem, however, that
the early expectations imposed on the boys was well warranted. All they’ve done in their first three matches is beat schools with teams drawing from about 10 times the population of St. Gabriel. And if you believe what their coach has to say, we have yet to see the best of them.
The boys play Father Lacombe this week, and Bishop McNally next Thursday at home.

Girls Volleyball
has been a very strong start to the season for both Varsity Girls Volleyball teams. The Senior Girls started their season last week with two convincing wins over Lester B Pearson and Father Lacombe. The girls did not drop a set in either match, and have dropped only one of their last 13 sets dating back to the pre-season.
Coach Melissa McCutcheon has been pleased with her team’s performance thus far
and notes the consistent play and leadership of Melissa Sikorski and Rachel Patzer as being pivotal in their success.
Meanwhile, the Junior Girls, coached by Cynthia Hanson, rebounded nicely after dropping their first match of the season. They also blanked Lacombe and Pearson by 3-0 scores and now sit tied for second in the league. The team dresses two grade 10 players, Diana Dang and Olivia Raposo, as its primary setters
and places a lot or responsibility on its younger players. The team does, however, have several returning players from last season’s championship team, in captain Kaylee Olmedo, Raenelle Mendoza, Bridget and Micah Dettling, and are hopeful their experience will continue to pay off.
Both teams continue their seasons with two games this week; away to Bishop McNally and at home against Notre Dame on Thursday, Oct. 4th.

View all photos for this story

Maisonneuve pushes for the finish line

Diana Dang (9) in action for the JV girls